The Chola dynasty (10- 12th century A.D.) was the most successful dynasty to emerge in Tamilnadu, India. Not only did they have an absolute sovereignty over large parts of deccan peninsula, but they were successful in capturing the South East Asian kingdoms also. They were the only maritime power with strong Navy that was capable of defeating other countries in the course of thousands of years of history of Indian civilisation.

Apart from this tale of valour, this dynasty has left a lasting impression in the Indian subcontinent in the shape of the three great Chola temples. The set of 3 such temples at Tanjavur, Gangaikondacholapuram and Darasuram is now recognised as a Unesco world heritage monument. All these 3 temples have exquisite stone carvings.

These temples are distinctly different from the usual Dravidian temple architecture. In the Typical south indian temples the entry gates are grand structures called Gopurams and the main deity is located well inside the temple complex. The location of main deity has much smaller structures when compared to the tall and majestic Gopurams. Unlike this arrangement, the Chola temples have their main Shikhars(Vimanas) above the sanctum sanctorum itself. The gates are of secondary importance and not particularly impressive.

The first Chola temple( and the biggest) is the Brihadeshvara Temple in Tanjavur, sometimes called The big Temple. It was built in 1010 AD by Rajaraja Chola I. It has one the biggest Shivalings (8.7m). The Vimana is 216 feet high and is supposed to have a single stone of 80 ton weight on the top. In reality the top stone is in 8 pieces and it is skillfully fused together in the shape of a single stone Shikhar.

This stone was placed on top by pulling its pieces by elephants through a 7 kilometer long ramp. The village from where this ramp originated still exists. 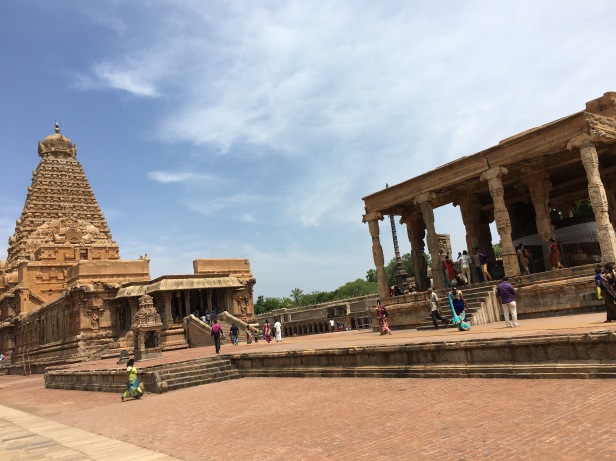 The ever present Nandi sitting just outside the temple is another majestic site. It is the second largest nandi( the largest one is in Lepakshi temple, Andhra Pradesh).

This Nandi was installed later by replacing the original Nandi created by the Rajaraja. 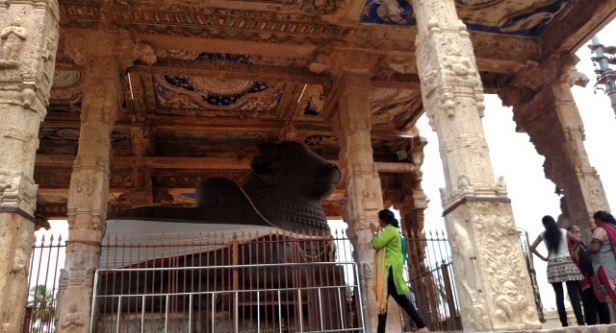 The original Nandi is Still kept in the left side corridor of the temple complex: 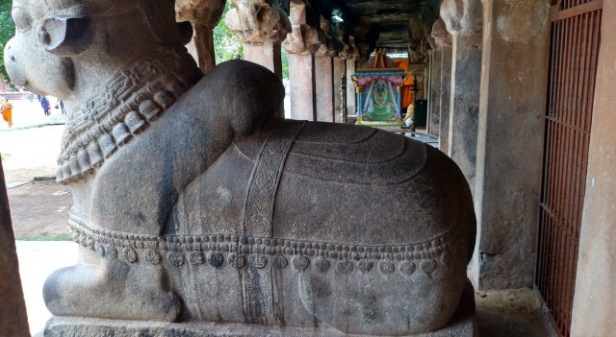 Another unique feat of its architecture is that the foundation is restricted to 6 feet.  All this humongous load is distributed evenly on the stone walls so that the structure still stands tall after more than a 1000 years. The Vimana( main tower) structure is hollow from inside. Above the sanctum sanctorum, the tower is constructed through a beautiful network of interlocking stone blocks. It gives a feeling of being inside an inverted well. The gentle tapering hollow leading to the top stone inspires awe at the thought of design and execution precision resulting in such a grand structure.

There were frescoes on the walls but they have been almost totally eroded with time. There are 108 stones on which various dancing forms of Nataraja (Dancing form of Lord Shiv) were to be carved, Only 81 sculpture were completed and rest was left incomplete.

There are 2 inner walls in the tower. There is a corridor on the first floor which shows the tapering walls of outer and inner areas. This tapering architecture leads up to almost half the height of the tower where these two walls join. Thus the top load beyond this point is distributed to these two outer and inner walls giving the structure much more stability ( just like having more stability when we keep our legs slightly apart).

Within these corridors there are just some hints left of the existing frescoes. One faint image shows the likely icon of the Creator, Lord Brahma, as it showhs 3 headed figure which is associated with him.

Just a level below this corridor area there is another corridor around the sanctum sanctorum. This is accessible from a side door hidden from the view.

This corridor has the world famous Fresco lined walls. The paintings display various events like Rajaraja Chola worshiping Shiv along with his wives, The celestial white Elephant Airavat and other mythological stories.

Image taken from the museum on site. 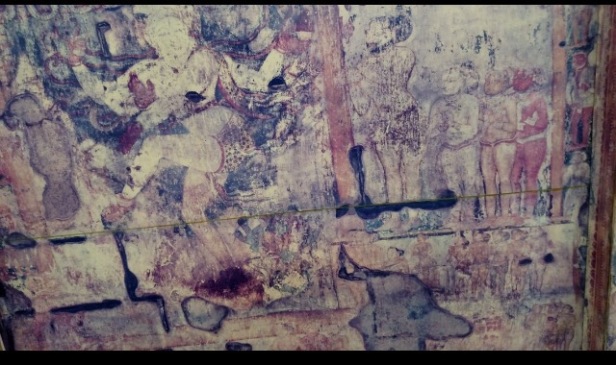 The Chola era frescoes were repainted by Nayakas with red and blue dominated themes, Archeological Survey of India has restored a few walls bringing out the majesty of the original art.

A fascinating feature unique to this temple is the inscription on the walls all around the temple. It is written in archaic Tamil. The words are beautifully carve on the hard granite. It is an immensely valuable historical archive set in stone for posterity. 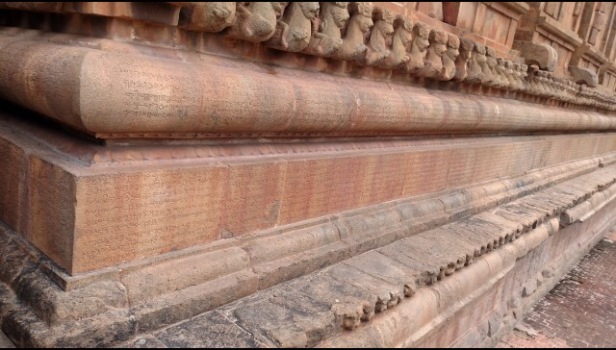 Any attemppt to convey the beauty and grandeur of this architectural marvel will always fall short of the real effect. Words and images are unable to do justice to the magnificence of the monument.

Just to give an idea about the massive scale of the temple structure, the photo below shows me as a red dot against the backdrop of the imposing structure. 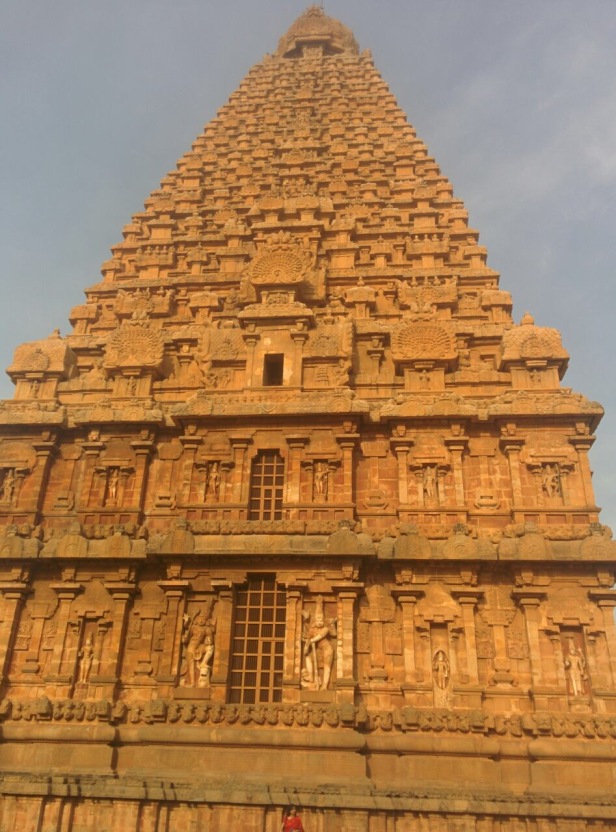