The Magnificent Chola Temple at Gangaikondacholapuram is the second Chola Temple of great significance and beauty. This Shiv temple was built by Rajendra Chola ( son of Rajaraja Chola I). 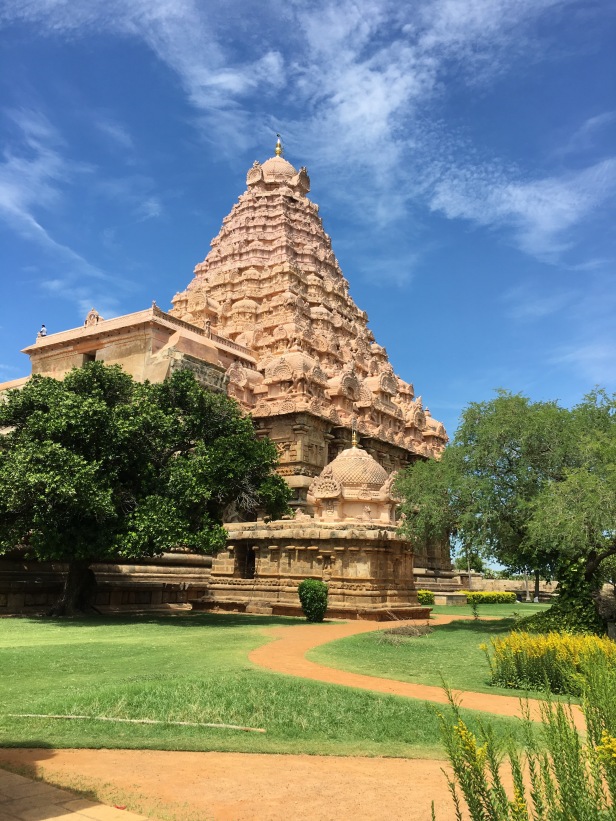 Gangaikondacholapuram became the capital of the Chola empire from 1025 AD for the next 250 years. This City was built to commemorate the victory of Rajendra Chola over the Pala dynasty ( Bengal). He was awarded the supreme title of ‘Parakesari’ for his victorious Gangetic expeditions, expeditions against the Chalukyas, Cheras, Pandyas and the overseas expeditions of Sri Lanka, Sumatra, kedah (Malaysia), Cambodia and others. His maritime  victories were due to a strong naval force and these victories make him a unique visionary among the thousands of years of Indian History.

Gangaikondacholapuram means the town of the Chola King, who brought The Ganga to his land (waters of the sacred river Ganga that flows across North India was brought here).

The Chola kings were ardent Shiv devotees. The fascination with the myth of Ganga being brought down to Earth from the heavens and Shiv using his Jata ( lock of matted hair on his head) to hold its force before releasing it gently, seems to have played a part in this fascination with Ganga.

The temple complex is a living proof of the vandalism by the erstwhile British Raj. The magnificent entry gate ( gopuram) has been reduced to an insignificant broken structure.

There was a two storey outer fort like wall along the periphery surrounding the the temple complex. This was almost totally demolished by the British and the granite stones were taken away to construct a dam on the nearby Kollidam River. Contrary to the claims of bringing civilisation to this land by British, this temple complex is a mute testimony of the destruction brought upon by an indifferent British empire unable to come to terms with such magnificence.

The photos capture the only remaining portion of the original two storey peripheral wall.

(This destruction is matched only by the deliberate destruction of the fabled Harappan area citadel, which was apparently discovered decades before the ‘official ‘ discovery of Harappa & Mohenjodaro and was totally destroyed by using its bricks for laying railway lines between Lahore and Karachi ( now in present day Pakistan) in the later half of the 19 th century. )

After crossing the ruined Gopuram ( entrance tower), one comes across a massive monolithic Nandi facing the temple. 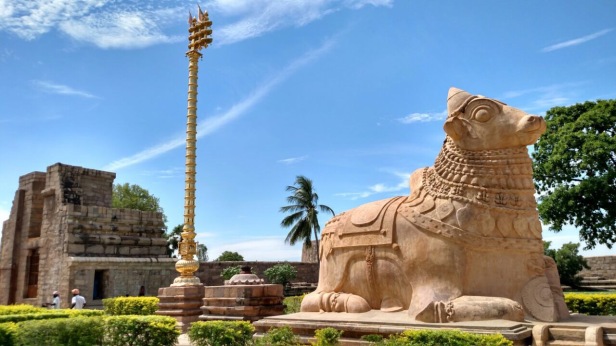 There is a huge lion on the East of the temple. 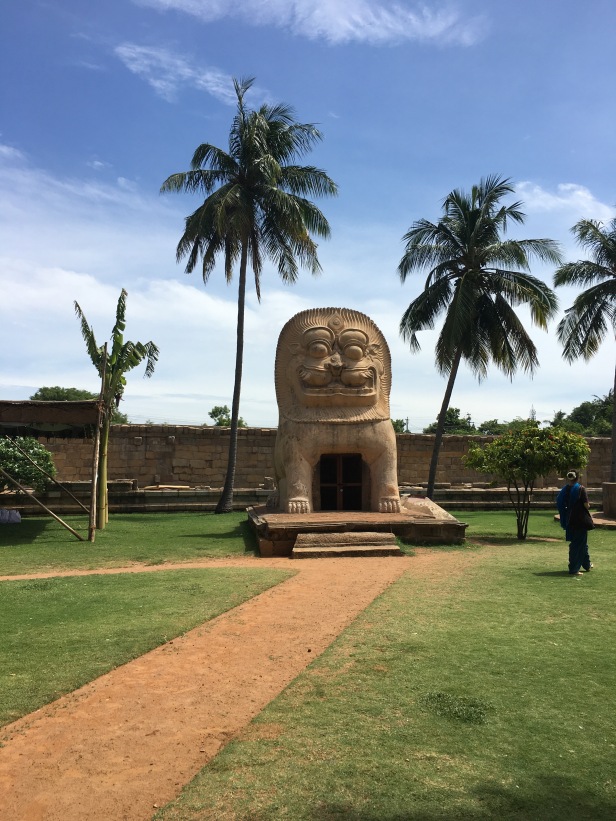 The lion motif is omnipresent all around  the main temple structure.

The Vimana is imposing in style and beauty with a height of 182 ft (55m). It is shorter than the Brihadeswara temple (Big Temple, Tanjavur ) which is 216 ft in height but it has a larger plinth area. The striking part of the shape of the Vimana is that it has recessed corners and a slight curve  when compared to the straight sided pyramidal Big Temple Vimana. This Temple is said to be the female counterpart of the Big Temple.

This temple surpasses the Big Temple in its sculptural quality. The entire facade has been adorned with exquisitely carved granite sculptures . As you walk around the temple you get the feeling of being watched by the animated sculptures.

The lifelike sculpture of Shiv and Parvati wherein Lord Shiv is giving Blessings to Rajendra Chola.

Normally Sculptures in Shiv temples depict Shiv and his family. This temple has a unique occurrence of Shiv in Natraj form and Vishnu next to each other.

[Nataraja and Vishnu in their iconic forms]

Goddess Saraswati and Goddess Lakshmi have been beautifully sculpted on the granite walls that lead to the side entryways. 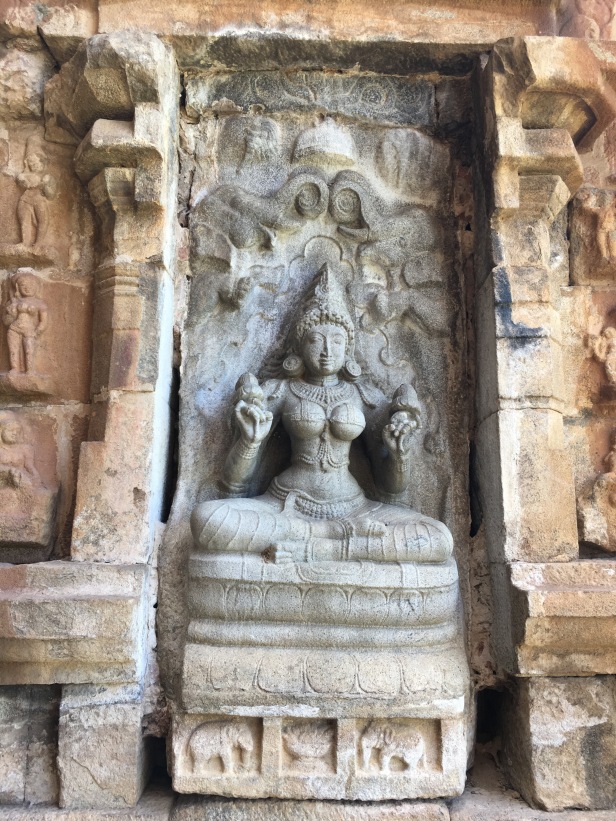 God depicted as a begging mendicant. Another prominent feature of this temple is that every deity is surrounded by three layers of devotees ( earthly and celestial) offering prayers. 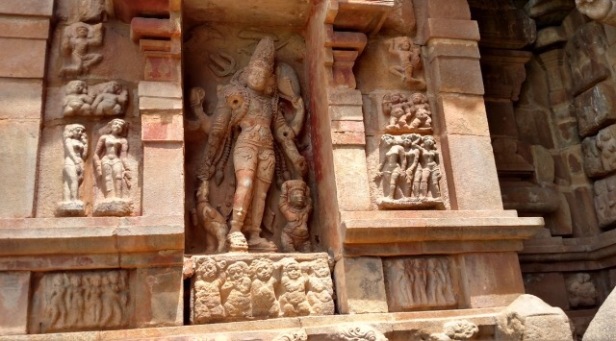 The imposing dwarpals ( gate keepers) on the East and West entrances to the sanctum Santorum. 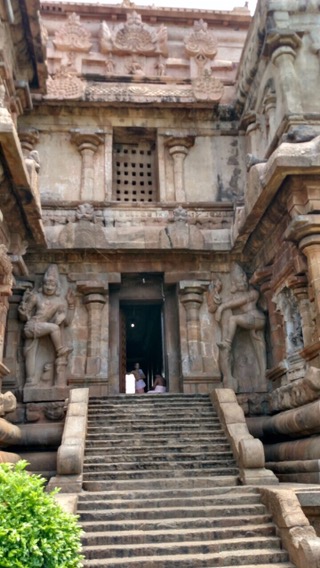 A magnificent Ganesh that is sculptured in such a way that it gives of musical notes  when tapped by a stone at different parts. Such musical effects are common in many South Indian temples.

The concept of Ardhnareeshwar (half female god) being a divine form is unique to Hinduism. As a part of worship, Shiv has been frequently depicted as having male and female forms amalgamated into a single entity. There is one such sculpture here that shows this concept beautifully. 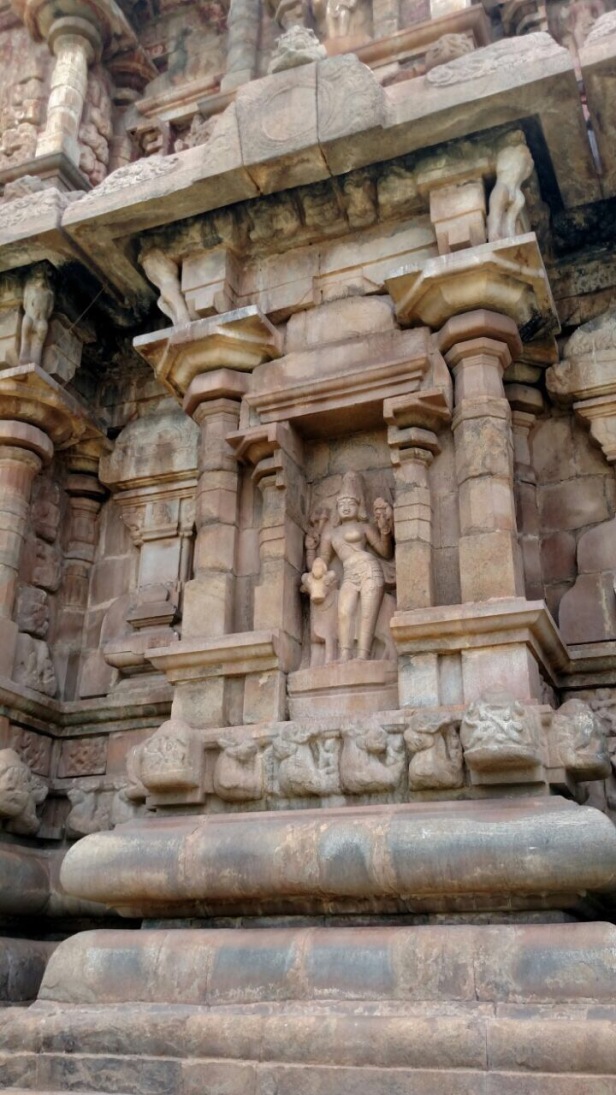 Certain areas of the outer facade have reminisces of red colour frescos done by the later Naikar Rulers.

The sanctum Santorum has one of the biggest Shivlings. As imposing as the one in the Brihadeeswara temple (8.7m), if not bigger.

The corridor around the inner sanctum reveals the precision with which the granite slabs were placed. There is no gap between any two connecting rocks. If one side of a slab is inclined then the adjoining stone has a matching incline. This is an amazing feat of masonry. These walls inside the sanctorum do not have any sculptures as it is said that due to Rajendra Chola’s numerous military expeditions, he could not devote attention to the construction at later stages.

Another feature common to the chola architecture is the way in which the granite stones are connected with the adjoining stone. Each slab has a joint like protrusion on one end and a similar size incision on the other. This ensures that each slab gets fixed into the other. Mind blowing techniques. Notice in the picture below there is a small round protrusion on the right lower side. One granite slab is missing and it reveals the mastery of precision and engineering on granite- one of the hardest rocks.

There are more smaller temples dedicated to other deities around the main temple. Some areas have been totally destroyed by the British and only the base rocks remain.

The Archeological Society of India has tried to renovate some incomplete/ damaged portions towards the front of the temple wall. The base slabs have lion and animal sculptures. The upper lever originally also had such sculptures that were removed by the British/ other onslaughts. The ASI has tried to replicate the original work but the sculptures fall far below the original. Our modern day tools and technology have not been able to replicate the life like animated quality of the ancient sculptures.

The original lion sculptures at the base of the temple.

Overall this temple just like the Big Temple at Tanjavur leaves one awestruck.

Location: It is in Ariyalur District of Tamil Nadu, India.

PS: In the South Indian temples it is the norm for the male devotee to be given a garland as a blessing. But in this temple the female devotee gets a garland. Gives me more reason to be in love with this temple.