Legend of the Column of fire

The Annamalai Hills are located in the town of Thiruvannamalai, Tamil Nadu at an elevation of 2671 feet. The Annamalaiyar Temple is where Lord Shiva is worshipped as Annamalaiyar or Arunachaleswar. In fact, legend declares the hill as a holy place, as it represents the primordial form of Lord Shiva. The story goes right back to the time just after creation, when the great trinity of Brahma ,Vishnu and Mahesh (Shiva) were yet to complete the creation of universe in its current form. It is said that Brahma and Vishnu both considered themselves to be better than the other and this had resulted in disharmony in the universe. To remedy this situation, Shiva appeared as a blazing pillar of fire with apparently no starting or ending point. Vishnu and Brahma decided to find the extremities of the pillar of fire and it was decided that whoever succeeds in this task will be the winner. Vishnu took the form of a Boar and started digging to try and find the lower end. Brahma took the form of a swan and flew upwards to find the upper end. They went on and on for eons, without any sign of the extremities of the pillar of fire. Vishnu surrendered and returned. Brahma also could not see the top but he saw a flower falling down and brought the flower back to claim that he had reached the top.

Shiva appeared in his real form and he was very angry with Brahma for this deception. He declared that due to this deception there wouold be no worship of Brahma anywhere. This ties in neatly with the fact that except in Pushkar, there are hardly any other places where Brahma is worshipped as the primary deity. Despite being a part of the holy trinity as the creator, the absence of  his worship is truly astonishing, to say the least.

Lord Shiva was requested to be in a form which could be worshipped by people and he obliged by taking the form of this hill. Hence for the devotees, the hill itself represents the form of Shiva. The temple is a much later addition during historical times starting around the ninth century.

This legend is represented by a creative rendition of a Shivlinga with Shiva in the centre of the column, a swan on the top and a boar (Varaha) at the base. This classic sculpture is on the outer wall of the garbha griha (Sanctum Sanctorum) of the Arunachaleswar Temple. It is called ‘Lingodbhava’ (emergence of the Linga). Thus, in this tradition the Linga is the representation of the original column of fire that represented Shiva.

The temple has a unique history as it has seen contributions from different kingdoms for almost a thousand years. The earliest historical reference is traced to the 7th century from the writing of one of the Nayanar saints, Sambandham. The contribution of various kingdoms have been detailed in the inscriptions within the temples. These inscription stones are found in multiple locations inside the temple and new ones are still being discovered and deciphered.

The temple was under Pallavas up to 9th century and under the control of Cholas between 9th and 13th century after which it came under the control of Hoysala dynasty. During the barbaric attacks of Malik Kafur, the General of the Delhi sultanate ruler Alauddin Khilji, when many major southern dynasties like Pandyas (Madurai), Kakatiyas (Warangal) and kingdom of Kampili fell by the wayside, the Hoysala king Veer Ballala III fought him off successfully from Tiruvannamalai.

Between 14th to 16th centuries it was under the control of various dynasties of the Vijayanagara Empire. There are inscriptions indicating gifts and endowments were made to the temple by the powerful Vijayanagara king, Krishna Dev Raya.

This Temple complex is not only famous for its massive size and the magnificent nine Gopurams but is also highly regarded as a spiritual and holy place. Devotees throng this complex throughout the year.

Just outside the sanctum sanctorum are the idols (murthy) of the 63 Nayanmar saints, the famed devotees of Shiva. These devotees lived between 6th and 8th century CE. and they sang the praise of Lord Shiva in their compositions in Tamil, helping in the spread of Shaivism throughout the area. These idols are arranged in a straight line in the long corridor and this area is freely accessible to the visitors.

At the end of this impressive corridor is a Pallava style bas rebas-reliefture of Lord Ganesha. It is called Kshetra Ganapati and is one of the oldest sculptures in this temple.

This temple and the associated hill is inextricably linked with the festival of Kartigai Deepam. This festival falls on the Purnima (full moon day) of the Indian month of Kartik. This day is celebrated as the Maha Deepam day in this temple. A huge lamp (called Thiruvannamalai Maha Deepam) is lit on top of the hill in the evening and is visible for a radius of 35 kilometers around the holy mountain. Lakhs of devotees attend this auspicious event. To celebrate the linkage of sacred fire with this temple, the devotees light the Deepams daily in this temple, which is beautifully captured in the photo below.

A beautiful and very old statue of Ardhnareeshwar plays a very important role in these temple rituals. Ardhnareeshwar is the ultimate divine manifestation of the masculine and feminine in the same deity. It is the combined form of Lord Shiva and his wife Goddess Parvati. It implies that the sacred feminine is inseparable from the male God Shiva. The right side of the statue is Shiva in his masculine form and the left side depicts Parvati.

During the famous Kartigai Deepam festival, this Ardhnareeshwar murti is ceremoniously brought outside for a short time, giving an indication for the huge lamp to be lit on the top of the sacred mountain.

A unique feature of this temple is the presence of numerous ancient murtys (idols) of Shiva, Parvati, Ganesh, Murugan etc. all around the inner sanctum area.  These are metal artefacts cast in various alloys of metals. One such set of idols shown below represents Kartikeyan (Murugan) with his wives Valli and Devyani/Devasena. 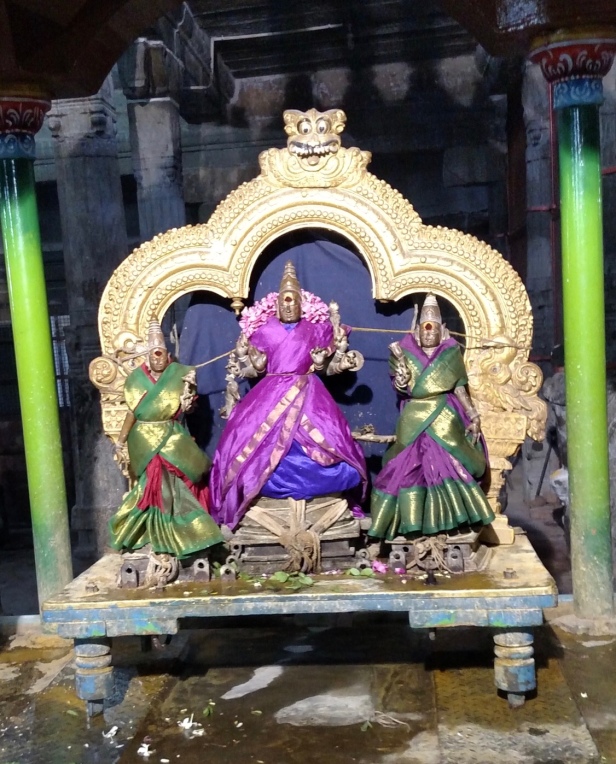 In one corner of the inner corridor, there is a Bronze Nataraja idol which is a rare item as very few such idols are made exclusively of Bronze.

Within the temple is an ancient shrine devoted to the various forms of Devi. It is the oldest part of the temple complex. In front of this shrine is an ancient Trishul (Trident) carved in granite. There is a very old Bel (Stone Apple) tree nearby which froms an integral part of Shiva worship.

A shrine dedicated to Lord Ganesh is the first place that devotees throng to. The unique aspect of this shrine is the vermilion coloured idol of Ganesh. This part of the temple was constructed by the Hoyasala dynasty.

Amazing filigree work adorns the pillars of this temple. These are single rock structures carved into multiple pillars of various girth and include different forms of stone art.

The temple courtyard is double storeyed and typical of the 12th century Chola architecture. Later on, Krishnadev Raya introduced the outer pillar structure in the courtyard.

There is an inconspicuous plain looking mandapam next to the courtyard which is a must visit for every person.

There are beautifully carved pillars in the mandapam and the roof has beautiful frescoes where the ancient vegetable dye colours look vibrant even after hundreds of years.

The inside walls have stories from Shiv Purana and other mythological stories painted with amazing dexterity. The artists have captured the nuances of every scene by deft use of colour and contrast.

Like most of the temples in South India this temple also has a temple tank, which is used for ceremonial purposes. 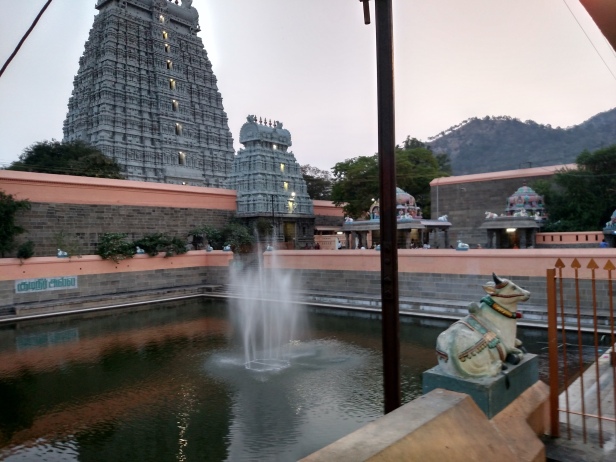 This temple is situated just below the mountain which represents the fiery pillar form of Shiva. That is why the mountain itself is the main object of worship for the devout pilgrim. The pilgrims do the Pradakshina (circumambulation) of the mountain on a 16 km route called GIRIVALAM.

There are 8 ancient shrines on this Girivalam Pradakshina route. Each of these have a different lingam as their main deity. These are named after different Gods and Rishis. Collectively they are known as Ashta Lingam. Due to the spiritual energy associated with this location, a large number of pilgrims come here from all around the world.

The Arunachaleswar temple is considered as the spiritual birth place of the great sage Raman Maharshi who promoted the idea of attaining salvation through self-awareness. He is supposed to have gained enlightenment while meditating at the shrine called Patala Lingam situated within the 1000 pillar hall in this temple. His ashram is situated just below the holy mountain and it attracts a large number of devotees who are attracted by his message of self-enquiry and realisation of one’s true self.

One of the legends associated with this place states that Shiva’s wife Parvati came here to do penance. In her playfulness once, she had covered the lord’s eyes for a few moments. Due to this, there was darkness in the world for a long time, creating hardship for people. Therefore she came to this holy place for atonement. This association of Devi is reflected in an ancient shrine of Van (forest) Durga, which venerates the Shakti form of Devi. This shrine is located a few kilometers away from the main temple. Here Goddess Durga’s stone image is a basic ‘Adi Kaal’ form, said to be from a very ancient era. 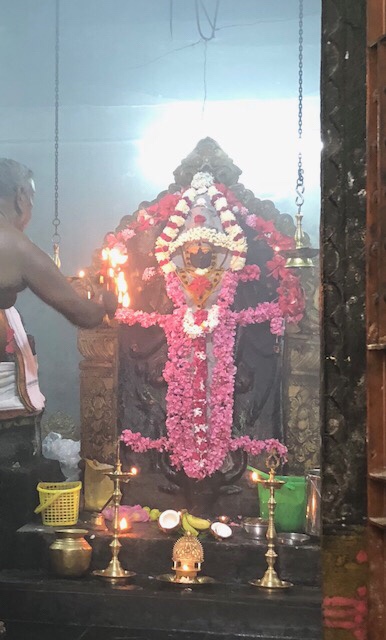 In this temple, before the Aarti of Van Durga takes place, the traditional ‘Dhuno’ of burning incense out of a dhunachi (a traditional large cavity incense burner with a long stem) is done. Dhunachi Aarti is also known as Dhoop Aarti. This ritual immediately reminded me of the mandatory Dhunachi Aarti during Durga Puja in Eastern India. At that moment I had a realisation that where ever I am in this ancient holy landscape, I am always with ‘Ma Shakti’. This land is blessed.

Arunachaleswara at Thiruvannamalai is a unique Shiva temple for two main reasons. The first point is that the mountain itself is considered holy and has its own importance as it is supposed to represent the original form of Lord Shiva as the primordial pillar of fire. The temple itself is a much later creation and it functions’ as an adjunct to the spiritual energy of the mountain itself. The other point is that despite integral in the mythology of Shiva worship, this place is not part of the set of 12 jyotirlingas, which represent Shiva’s form of fire or light. Probably as this place itself is the original pillar of fire, it is above and beyond the scope of representation as a symbolic Jyotirlinga. The presence of a large number of people from all around the world in the Ramana Maharshi ashram, in search for salvation, gives this nondescript town a deep sense of spiritual energy.

This article was first published in Pragyata.